In the previous post, I shared that God often does not tell us where we are going, because He is more--in fact, MOST--interested in our trusting Him more.

I drew this revelation from a passage I have often studied, quoted, and shared with others: Mark 4: 35-41.

The disciples are on the sea, heading to the Gadarenes. Jesus has told them: "Let's cross over the other side." While they are rowing over, a great storm overtakes the ship, and the ship begins to take on water. The disciples, fearing the worse and fearing for their lives, wake up Jesus, was sound asleep in the bottom of the ship. He comes out and stills the storm with one word. Then shares the following:

"And they feared exceedingly, and said one to another, What manner of man is this, that even the wind and the sea obey him?" (Mark 4:41)

I have often found that phrase "they feared exceedingly" quite startling. They were afraid because of the boisterous storm and winds, plus the water pouring into the ship. But when Jesus answered, in fact OVER-answered their prayers, they were MORE afraid! How unfortunate! God always points out that passage to me, and shows that the disciples' biggest problem was not the storm, but their lack of faith.

Jesus told them where they were going! Jesus even stilled the storm for them, and yet instead of being calm, they were even more afraid. How terrible is that! God wants us know that we can trust Him, and trust Him fully. We have no reason to fear Him.

There are other reasons why God does not tell us where we are going.

He wants us to depend on Him completely, not our own efforts, to get there.

Consider this wonderful type in Deuteronomy:

"When thou comest into thy neighbour's vineyard, then thou mayest eat grapes thy fill at thine own pleasure; but thou shalt not put any in thy vessel.

In this judgment, God invites the Israelites to eat as much of the grapes or the corn that they can eat there in the vineyard. They are not permitted, however, to harvest and save more for later. What's going on?

Jesus encouraged the Israelites during His earthly ministry to pray this prayer:

Jesus did not say "this monthly bread" or "this yearly bread". What's going on here? Jesus needs us to see that He is our Bread, the Bread of Life (John 6:35)

God does not want us relying on our efforts. He wants us completely dependent on Himself. This has nothing to do with God being on some kind of ego trip, by the way. We were created from Him, and in Him alone we can live, move, and have our being (Acts 17:28)

Jesus is our life (Colossians 3:4), and therefore He wants us to rest in Him and receive from Him at all times. With this in mind, God does not necessarily tell us where we are going, because He wants us to let Him take us there.

Here's another example of His favor at work in our lives, if we allow Him to:

"19So when they had rowed about five and twenty or thirty furlongs, they see Jesus walking on the sea, and drawing nigh unto the ship: and they were afraid. 20But he saith unto them, It is I; be not afraid. 21Then they willingly received him into the ship: and immediately the ship was at the land whither they went." (John 6:19-21) 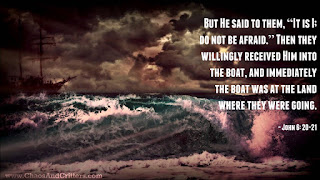 Again, the disciples were rowing on the sea, and they were trying to get to a specific destination. The winds were contrary to them, and for all the efforts, they were not able to get where they wanted to go. Then Jesus arrived on the sea, on the scene. He almost passed them by, but the disciples reacted to Him. He told them: "I am. Be not afraid."

Then check out the miracle that followed: "When they willingly received Him into their ship, they immediately got where they were going."

This is a miracle of time and space, too, and most readers miss it. They welcomed Jesus into their ship, and they right way, straightaway, no holding back got to where they were trying to get in their own efforts. In this year of Time and Space, we see that God is making up for lost time, and taking us over greater spaces in spite of outside limitations. 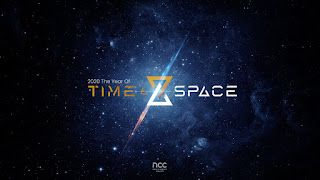 God showed me yet another reason why He does not necessarily tell us where He is taking us: it will take longer. If we let Him guide us, we will get where He wants us to go much quicker than if He told us where He was taking us, and we in turn relied on our efforts to get there.

And that's a tendency we have, isn't it? We know where the end point, the goal is, and we spend all of our time and energy getting to that place, arriving at that station in our lives. Yet all the while, we end up missing what, or rather Who life is about: Jesus.

And Jesus does not want us to miss out on Him:

We don't need to focus on knowing where exactly He is taking us. He is most importantly in our knowing Him intimately and trusting Him fully to get us to a good place, no matter what the obstacles and difficulties which meet us along the way.

Posted by Arthur Christopher Schaper at 8:43 AM