His Life Guides Our Life

We are not set free through our own efforts.

If we were able to set ourselves free, then we would never be in bondage to begin with!

"If the Son therefore shall make you free, ye shall be free indeed." (John 8:36)

We are set free by Someone Else.

If He has set us free, then why not allow Him to guide is in turn through every other part of our lives?

"And let the peace of God (lit. Christ) rule in your hearts, to the which also ye are called in one body; and be ye thankful." (Colossians 3:15)

Before Paul writes about Christ Jesus' peace guiding us, He reminds us who our life is:

"When Christ, who is our life, shall appear, then shall ye also appear with him in glory." (Colossians 3:4)

So, if He is our life, does it make sense for us to try and figure things out in our lives, as though God is holding back from us, or that He does not want us to be guided by His peace?

"Peace I leave with you, my peace I give unto you: not as the world giveth, give I unto you. Let not your heart be troubled, neither let it be afraid." (John 14:27) 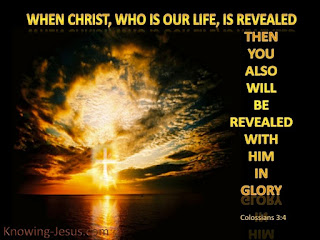 For the last two months, I have not held a steady job. At one point two months ago, I panicked so greatly, as though I had to strive, struggle, and figure out what I wanted to do next in my life. The whole future seemed like a black whole, or a nebulous question mark.

Where am I going? What am I supposed to do?

Even as I write the above question out, another Scripture comes to mind:

He is the way!

There is no reason for me to fret about what directions I need to take or next steps I need to make:

"Declaring the end from the beginning, and from ancient times the things that are not yet done, saying, My counsel shall stand, and I will do all my pleasure:" (Isaiah 46:10)

There is no reason for me to fear or worry about my future. He has already prepared the way for me, just as He ensured that Jacob and his family would be saved--and through him all the world would be saved through Jesus Christ!

"And I will make of thee a great nation, and I will bless thee, and make thy name great; and thou shalt be a blessing:" (Genesis 12:2)

"13And, behold, the LORD stood above it, and said, I am the LORD God of Abraham thy father, and the God of Isaac: the land whereon thou liest, to thee will I give it, and to thy seed; 14And thy seed shall be as the dust of the earth, and thou shalt spread abroad to the west, and to the east, and to the north, and to the south: and in thee and in thy seed shall all the families of the earth be blessed. 15And, behold, I am with thee, and will keep thee in all places whither thou goest, and will bring thee again into this land; for I will not leave thee, until I have done that which I have spoken to thee of. 16And Jacob awaked out of his sleep ..." (Genesis 28: 13-16)

I trust Him to take care of me, because He said that He would.

It is not my job to figure out the way that I need to go. It's my responsibility to see more of Him--the Way, the Truth, and the Life--and allow Him to lead me.
Posted by Arthur Christopher Schaper at 11:19 AM No comments:

Rahab The Harlot was Righteous! But How? By Faith!

Rahab was a harlot, which in today's langauge means that she was a prostitute.

Yet for God, righteousness is never based on what we do.

It's all about believing on Him!

Righteousness is all about faith, trusting God and His Word, not our flesh and our efforts:

"Behold, his soul which is lifted up is not upright in him: but the just shall live by his faith." (Habakkuk 2:4)

Let's not forget God's promises to us through His prophet Isaiah: 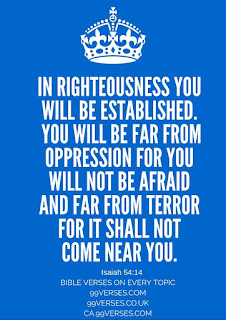 "14In righteousness shalt thou be established:
...

"17No weapon that is formed against thee shall prosper; and every tongue that shall rise against thee in judgment thou shalt condemn. This is the heritage of the servants of the LORD, and their righteousness is of me, saith the LORD." (Isaiah 54: 14, 17)

Consider in the 17th verse that God tells us "Their righteousness is from me."

So, how was Rahab the harlot righteous?

Consider what she said to the Israelite spies who entered Jericho!

"And she said unto the men, I know that the LORD hath given you the land, and that your terror is fallen upon us, and that all the inhabitants of the land faint because of you. 10For we have heard how the LORD dried up the water of the Red sea for you, when ye came out of Egypt; and what ye did unto the two kings of the Amorites, that were on the other side Jordan, Sihon and Og, whom ye utterly destroyed. 11And as soon as we had heard these things, our hearts did melt, neither did there remain any more courage in any man, because of you: for the LORD your God, he is God in heaven above, and in earth beneath." (Joshua 2: 9-11)

Let's look at the powerful testimony of this woman of faith!

She knew that God had given the land to the Israelites.

She heard and believed what God did to the Red Sea, and He destroyed the heathen kings in the Promised Land. She also affirms the pre-eminence of the LORD!

"12Now therefore, I pray you, swear unto me by the LORD, since I have shewed you kindness, that ye will also shew kindness unto my father's house, and give me a true token: 13And that ye will save alive my father, and my mother, and my brethren, and my sisters, and all that they have, and deliver our lives from death." (Joshua 2: 12-13)

She not only belived in the One God, but believed Him to be gracious!

"But without faith it is impossible to please him: for he that cometh to God must believe that he is, and that he is a rewarder of them that diligently seek him." (Hebrews 11:6)

So, let us review.

Abraham was made righteousness because he believed in the LORD. Abraham took God at His word that He would bless Abraham and make Him a mighty nation--that the Dragon Slayer who would crush the head of Satan would come and redeem all mankind (Genesis 3:15).

Rahab believed in the LORD, too, recognizing His mighty deeds and the good works that He intended to do for Israel and for the world. 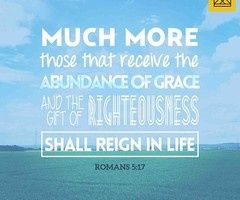 And of course, the writer of Hebrews identifies Rahab as faithful!

"By faith the harlot Rahab perished not with them that believed not, when she had received the spies with peace." (Hebrews 11:31)

AMEN!
Posted by Arthur Christopher Schaper at 5:23 PM No comments:

Do You Esteem Your Woes Greater Than Your Savior?

Yet so many of us look at our circumstances, are difficult decisions, our hard times, and even our sins and failures.

We esteem what we have been through or what will face as greater than what Jesus did for us.

Do you really think that God does not care about what you are going through?

Check out how much our loving Father knows about us:

29Are not two sparrows sold for a farthing? and one of them shall not fall on the ground without your Father. 30But the very hairs of your head are all numbered.31Fear ye not therefore, ye are of more value than many sparrows. (Matthew 10: 29-31)

He knows how many hairs we have on our heads! 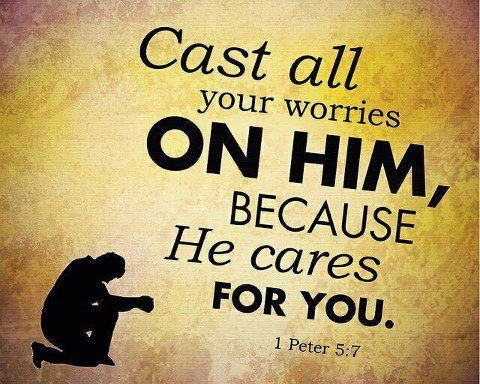 Check out how well He keeps close to us, too!

"O LORD, thou hast searched me, and known me.


2Thou knowest my downsitting and mine uprising, thou understandest my thought afar off." (Psalm 139:1-2)

There is nothing that is hidden from His view, and our concerns are very much His concern!

Peter reminds his readers to see our Loving Father as fully invested in caring for us, too!

"Humble yourselves therefore under the mighty hand of God, that he may exalt you in due time: 7Casting all your care upon him; for he careth for you." (1 Peter 5:6-7)

Do not think that the concerns you face, or the hardships you are facing, are of no importance to God. Do not think for one second that the challenges before you are too great for your loving Father, either:

"Behold, I am the LORD, the God of all flesh: is there any thing too hard for me?" (Jeremiah 32:27)
Posted by Arthur Christopher Schaper at 3:38 PM No comments: