In Christ, You Are No Longer an Abomination

"Thou shalt not lie with mankind, as with womankind: it is abomination." (Leviticus 18:22)

The topic of homosexuality (and transgenderism) is becoming more contentious in the world and particularly in the Body of Christ.

No doubt, this is an issue, because of the many sins against which God warns His people Israel, and which God calls us to abandon in our new life in Christ, there is no sin which receives such opposing praise and celebration in the world than homosexuality.

This discussion came up in the latest episode of "Ask Me Anything" from the TrueLove.Is ministry based in Singapore. (Click here)

For today, I am not going to look specifically at the sinful act, but the word "abomination", and the revelation which we can receive about our Lord Jesus Christ, and everything that He has accomplished for us at the Cross.

In the original Hebrew, "abomination" is "toevah":

The first mention of abomination in the Old Testament has nothing to do with sexual sins, but rather how the fallen world, the Gentile world, viewed abominations in contrast with the Isrsaelites. The scene from the verse below arises from Joseph (at the time, disguised as the viceroy of Egypt) dining with his brothers:

The Egyptians refused to eat with the Israelites. Egypt and Egyptians are types of the world, types of the fallen world specifically. In Hebrew, Egypt is called "Mizraim", which means "double straitness" or anguish. Egypt also speaks of a man-centered, flesh-centered life, as opposed to the life of grace which God called His people to receive in the Promised Land of Canaan.

I sought greater revelation from the Lord about this passage. Why did the Egyptians find the Israelites to be an abomination, such that they did not want to dine with them?

The next mention of "abomination" in the Old Testament may give us a clue:

"That ye shall say, Thy servants' trade hath been about cattle from our youth even until now, both we, and also our fathers: that ye may dwell in the land of Goshen; for every shepherd is an abomination unto the Egyptians." (Genesis 46:34)

So, the Israelites are an abomination to the Egyptians because they are shepherds. Still, it's not clear to me. The third mention of abomination in the Old Testament will shed still further light on the matter:

The Israelites are an abomination because they are shepherds and because of the sacrifices they are going to sacrifice. What's the full explanation here?

The Egyptians worshipped sheep. One of their gods, Khnum, was a sheep! 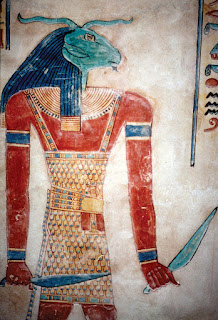 What's the deeper revelation we can draw out of this, and what can God show us about the term "abomination" and its deepest meaning to God? What does He find essentially to be an abomination to Him?

The Egyptians worshipped sheep. One of their gods was a sheep. But wait a second ... we worship " a sheep", right: the Lamb of God, Jesus, do we not?

"The next day John seeth Jesus coming unto him, and saith, Behold the Lamb of God, which taketh away the sin of the world." (John 1:29) 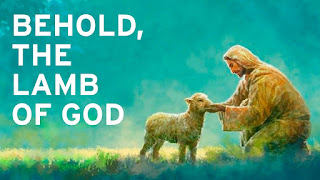 "Saying with a loud voice, Worthy is the Lamb that was slain to receive power, and riches, and wisdom, and strength, and honour, and glory, and blessing." (Revelation 5:12)

In a much broader, holier sense, we worship a "Lamb", too. But there is a telling difference between Egyptians' worship and our worship today.

The Egyptians worshipped a lamb, and they had to serve him.

We worship the Lamb of God, because He first served us, He first loved us (1 John 4:19). In fact, He deliberately came down to our level and died on the Cross for all our sins! Such a notion, that God would become man and die for us, is indeed an abomination to the world, and the world despises us for believing in Jesus:

"Being defamed, we intreat: we are made as the filth of the world, and are the offscouring of all things unto this day." (1 Corinthians 4:13)

The Egyptians performed rituals for their god. Our God, the Lord Jesus Christ, performed great miracles and completed a perfect work for us at the Cross!

So, "abomination" in the Old Testament can give us a window into learning more about Jesus.

Consider the word toevah in the original Hebrew:

Jesus became an abomination, became SIN for us, that we might be made the righteousness of God in Him (2 Corinthians 5:21). He took on all the wrath of God for our sins (Romans 3:24-26). He took all the penalties for our sins, and by His stripes, we are healed (Isaiah 53:5)

If we are honest, we were all abominable, full of pride (Proverbs 16:5), making self-serving sacrifices just to please ourselves (Proverbs 15:8), engaging in corrupt dealings (Proverbs 11:1), or living in anger (Proverbs 3:32)

But Jesus became sin, because the greatest abomination, that we might be made not just righteous, but attaining, becoming the righteousness of God in Him! We are no longer rejected, by accepted, highly favored in our Beloved Savior (Ephesians 1:3-6).

In fact, even in the Old Testament, we have a picture of God's grace already at work. Notice that God does not say that the individuals who engage in same-sex behaviors are an abomination. He calls the behaviors themselves an abomination.

Today, if you believe in Jesus, you are no longer an abomination, but a cherished child of God, one with Christ Jesus.