Receiving His Righteousness, and the Rest is Added to Us

"But seek ye first the kingdom of God, and his righteousness; and all these things shall be added unto you." (Matthew 6:33)

It's all about His righteousness.

Yet let's emphasize: this is God's righteousness that we are talking about.

It's amazing how great His forgiveness has been for us.

It's great to recognize that Jesus has accomplished so much for us.

We need to recognize and rest in what His blood accomplishes, the sins that are cleansed, and that His blood keeps on cleansing us from all our sins (1 John 1:7,9)

We need to look to Him, to look at Him, to receive His righteousness and to rest in His grace at length.

For the last week, in spite of the greatest challenges facing me, I realize today that it's all about His gift of righteousness.

What Jesus has accomplished at the Cross, where God the Father has placed me in relation to His Son, all of this takes the full pre-eminence. I don't have to figure what is going to happen tomorrow. My "job" is to believe on Him (John 6:29), to revel and rejoice in His gift of righteousness at all levels.

This is a new life, to say the least.

I don't look at what the world has taken away from me, or what circumstances and actors within those circumstances may have done to me.

I just look at Jesus, the Author and Finisher of Faith (Hebrews 12:2), and in Him every need is met, every wrong is righted, and every failure is corrected.

Most of all, every loss is restored!

Posted by Arthur Christopher Schaper at 10:02 PM No comments:

Do You Prize His Righteousness Above All Else?

This is a challenge for me.

I look at my circumstances, and I look at other people's circumstances.  I want to make the best of every situation, and I want to believe that all things are working for my good.

And yet it is so easy for us to look to one side or the other, to think that things are not going our way.

I had written about last year, how I had faced such hardships at one point. I didn't have a stable income, and I didn't have a car. One night, I just shouted at the sky, and I said "God, what good is it that your Son died on the Cross and I can't even pay the rent?!"

That was an honest moment for me. I didn't make nice or play with God. I told Him exactly how I felt.

Then a new revelation rushed into my heart, and yet a reminder of how important it is to rest in the eternal truths we have heard since we believed on Jesus.

What's the point of having all the wealth and opportunities in the world, yet I cannot wipe away a sense of guilt and shame? I remembered the times in the past when I had the job, when I had the car, and there was such misery in my life.

Indeed, I realized how good I have it today because I believe that because of Jesus' death on the Cross, I am forgiven of all my sins forever--past, present, and future! My sins are paid for! Jesus' bore my sins on that Tree, and I will never have to feel the punishment, the pain, the reproach of sin ever again!

I still remember when I was sitting in church, at Calvary Chapel South Bay. It was the second Sunday of July, and I remember just crying with such joy. "I will never be punished for the sins that I have committed or that I will commit in the future. Jesus bore ALL my sins on the Cross.

This revelation of the Gospel could not be clearer when you read 1 Peter:

"24Who his own self bare our sins in his own body on the tree, that we, being dead to sins, should live unto righteousness: by whose stripes ye were healed." (1 Peter 2:24)

He bore our sins in His body. He did it Himself, so that we did not have to.

That is something to celebrate, and what happened because Jesus did that for us?

"He shall see of the travail of his soul, and shall be satisfied: by his knowledge shall my righteous servant justify many; for he shall bear their iniquities." (Isaiah 53:11)

He bears our sins, and we receive His righteousness!

The next day--I had the job and the car! I had both needs met in one day!

Now, I face a new challenge. I see bad people who get away with stuff. I see people breaking the law, and there is no enforcement--or at least, so it seems.

Injustice is prevalent in our world. Should we be surprised? Perhaps it's time for us to stop being outraged because the world does not play fair, even in the criminal justice system.

There is an outcome which has occured which I find particularly unfair right now.

This is the second test when it comes to faith.

Even when I fail, do I have faith that God is love, and loves me. and will bless me.

Then there's this comfort, once again from 1 Peter Chapter 2:

"But if, when ye do well, and suffer for it, ye take it patiently, this is acceptable with God.

21For even hereunto were ye called: because Christ also suffered for us, leaving us an example, that ye should follow his steps: 22Who did no sin, neither was guile found in his mouth: 23Who, when he was reviled, reviled not again; when he suffered, he threatened not; but committed himself to him that judgeth righteously:" (1 Peter 2:20-23)

Today, I prize His righteousness yet again.

We have His righteousness! We reign in His life!

So, the question returns ... Do you prize His righteousness above all else?

My answer is YES! 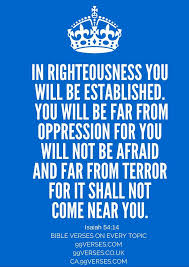 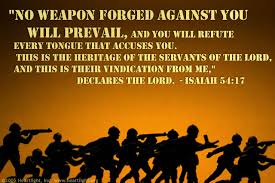 Posted by Arthur Christopher Schaper at 9:20 AM No comments:

Do We Really Believe that All Things Work for Good? 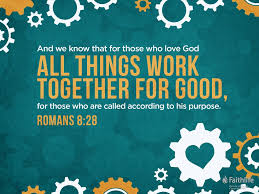 "And we know that all things work together for good to them that love God, to them who are the called according to his purpose." (Romans 8:28)

Paul was definite and unwavering about this.

"We know that all things work together for good ..."

Do you really believe that?

The trial of faith is all about taking God at His Word. Do we really believe that He cares for us, in the face of everything

It all starts with what His Son Jesus did for us.

That is how we know that He is on our side:

"What shall we then say to these things? If God be for us, who can be against us? 32He that spared not his own Son, but delivered him up for us all, how shall he not with him also freely give us all things? 33Who shall lay any thing to the charge of God's elect? It is God that justifieth. 34Who is he that condemneth? It is Christ that died, yea rather, that is risen again, who is even at the right hand of God, who also maketh intercession for us." (Romans 8:31-34)

How do we know that God is on our side? It's all about His Son Jesus and what He did for us at the Cross.

It's not about whether we find that great parking spot or not.

It's not about whether we are justly or unjustly freed from a criminal or civil penalty in court.

It has nothing to do with what may happen tomorrow.

It has everything to do with what Jesus did for us at the Cross.

This was the touchstone for growth for me. I learned that He is taking care of me not because my cirucumstances are going well. We have to appraise, esteem the sacrifice that Jesus became for us:

It's the gift of righteousness which enables us to receive all other gifts.

With this promise in mind, with this affirmation in place, we can know and believe that all things work together for good.

Isn't there a caveat in place? All things work together for those who love God.

We need to work on loving God more, right?

OK, but the source for loving God more comes from our knowing how much He loved us!

"Herein is love, not that we loved God, but that he loved us, and sent his Son to be the propitiation for our sins." (1 John 4:10)

Jesus--the same yesterday, today, and forever--is our mercy seat forever. Our sins are put away forever.

When we understand this, how can we NOT love Him?

It all goes back to the Gift of Righteousness and the abundance of grace which comes with it (Romans 5:17)

When we see that, then everything else falls into place, and all things indeed work for our good:

It's all about His gift of righteousness!
Posted by Arthur Christopher Schaper at 11:24 AM No comments: