I received this testimony from a friend of mine who has faced some unprecedented health privations.

I hope that this blesses you: 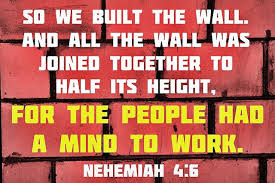 At last the wall was completed to half its height around the entire city, for the people had worked with enthusiasm.—Nehemiah 4:6
The most dangerous part of a work is when it is half done, when it has reached the halfway point, because the devil’s two favorite words are give up. As the people of Judah were rebuilding the walls of Jerusalem, the Bible tells us they were tempted to give up: “The people of Judah began to complain, ‘The workers are getting tired, and there is so much rubble to be moved. We will never be able to build the wall by ourselves’” (Nehemiah 4:10 NLT). Have you ever felt that way? The critics only win if you quit. Maybe you’re trying to get your life sorted out. You’ve thought, “What a mess!” Maybe you’ve struggled with alcohol, so you’ve asked God for help and have been able to get free from it for a while. Now take the practical steps. If you have any of it still left in your home, get rid of it. Sometimes you have to move out the old junk to make room for the new. If you have old friends who are dragging you down, get some new friends to take their place. Stop hanging around with godless people and start hanging around with godly people. Jesus said “If your foot causes you to sin, cut it off. . . . And if your eye causes you to sin, gouge it out” (Mark 9:45, 47 NLT). That was not meant literally. Jesus was saying that whatever it takes to be free from a sin that might be dragging you down, take action. Clear out the rubble. Then rebuild a brick at a time. Just start where you are, and don’t give up. Don’t give up on your marriage. Don’t give up on your family. Don’t give up on your life and your spiritual growth. Keep building. The most dangerous part of a work is when it’s half done.
Posted by Arthur Christopher Schaper at 7:22 AM No comments:

Email ThisBlogThis!Share to TwitterShare to FacebookShare to Pinterest
Labels: Don't Give Up, Give Up, Jesus, Nehemiah, Repairer of the Breach, The Wall
Newer Posts Older Posts Home
Subscribe to: Posts (Atom)