God Tests Us, So that He May Surround Us With His Grace

"And it came to pass after these things, that God did tempt Abraham, and said unto him, Abraham: and he said, Behold, here I am." (Genesis 22:1) 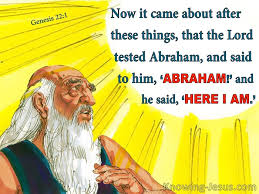 First, it's important to get the proper meaning from this verse.

The word "tempt" is not accurate, at least as we understand that word today. God did not tempt Abraham, in that he was seducing him to commit a sin.

The better rendering is "test", or rather "prove", so that He could see that Abraham had attained a robust faith in God.

God later asked Abraham to offer up his son Isaac:

"And he said, Take now thy son, thine only son Isaac, whom thou lovest, and get thee into the land of Moriah; and offer him there for a burnt offering upon one of the mountains which I will tell thee of." (Genesis 22:2)

Indeed, the LORD was asking Abraham to sacrifice his son, Isaac. Of course, what was really playing out here was the type and shadow of God offering His Son, His only Son, the Son whom He loved, for all the sins of the world.

Moreover, here we see Abraham's faith in God fully flourishing. The writer of Hebrews confirms this:

"17By faith Abraham, when he was tried, offered up Isaac: and he that had received the promises offered up his only begotten son, 18Of whom it was said, That in Isaac shall thy seed be called: 19Accounting that God was able to raise him up, even from the dead; from whence also he received him in a figure." (Hebrews 11:17-19)

Abraham trusted God so much, that he knew that God would bring His Son back from the dead. After all, God had promised earlier:

"3And I will bless them that bless thee, and curse him that curseth thee: and in thee shall all families of the earth be blessed." (Genesis 12:3)

"And, behold, the word of the LORD came unto him, saying, This shall not be thine heir; but he that shall come forth out of thine own bowels shall be thine heir." (Genesis 15:4)

God promised Abraham a son, and an heir, and that through this heir all the nations of the world would be blessed.

Now, what are these tests really all about?

Peter explains in his First Epistle:

"That the trial of your faith, being much more precious than of gold that perisheth, though it be tried with fire, might be found unto praise and honour and glory at the appearing of Jesus Christ:" (1 Peter 1:7)

God wants us to believe in Him and thus receive all things from Him:

"31What shall we then say to these things? If God be for us, who can be against us? 32He that spared not his own Son, but delivered him up for us all, how shall he not with him also freely give us all things?" (Romans 8:31-32)

Keep in mind, that we are called to grow in grace! (2 Peter 3:18), and our grace grows in our greater revelation of Christ Jesus (2 Peter 1:2). In fact, grace is something that we receive from God by faith:

"For by grace are ye saved through faith; and that not of yourselves: it is the gift of God:" (Ephesians 2:8)

God wants us to reign in life, and we reign in life as we receive--and keep receiving--the abundance of grace and the gift of righteousness (Romans 5:17).

So, what is all this testing about? What does God test us, try us, and thus prove our faith?

He wants us to receive more of His grace, His favor in our lives!

The word "Test" in Genesis 22:1 is the Hebrew word נָסָה

Here are the three letters for that word, and the meaning of those letters:

So, when God tests us, tests our faith, He is doing this so that His Son can surround you with his favor!

God wants us to live from faith to faith (Romans 1:17) for that is how the righteous live. He wants us to see more of Himself, and to receive more from Himself. When we face trials, hardships, and difficulties, we should never think that God does not love us or favor us. In fact, what God is doing is guiding us to see more of Himself, His love for us, so that He can extend more favor to us.


Posted by Arthur Christopher Schaper at 10:19 AM