Not Your Cross -- His Cross

"Blotting out the handwriting of ordinances that was against us, which was contrary to us, and took it out of the way, nailing it to his cross;" (Colossians 2:14) 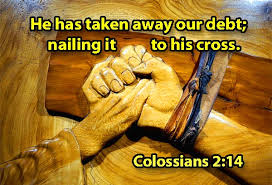 Many people draw a lesson for the Christian life from Luke 14.

Here are the verses:

"25And there went great multitudes with him: and he turned, and said unto them, 26If any man come to me, and hate not his father, and mother, and wife, and children, and brethren, and sisters, yea, and his own life also, he cannot be my disciple. 27And whosoever doth not bear his cross, and come after me, cannot be my disciple." (Luke 14:25-27)

In this context, we find a large, "great" multitudes of people who were walking with Him. It's easy to say that you are on the "Jesus team" when there are lots of other people around you, and no one can really pick you out of the crowd.

Jesus was not pleased with this. These crowds saw Jesus as a status celebrity, a symbol. They were fans. They were followers. They did not see Him as Savior.

Jesus cut through this feigned adoration.

"If you really want to follow me", Jesus told them, "if you want to see Me as a pattern, then you need to do everything I did. You need to give up everything, put everything into despicable disrepute, and then take up the cross."

"Taking up the cross" means more than merely carrying it around. When someone was carrying a cross, it meant that at some point, that person was going to hang on the cross and die.

In an earlier chapter in the Gospel of Luke, Jesus says to other would-be followers of Him, those who see Him as a pattern:

"And he said to them all, If any man will come after me, let him deny himself, and take up his cross daily, and follow me." (Luke 9:23)

To those disciples, those who earnestly wanted to "Be Like Jesus," He exhorted them to take up their cross daily.

Imagine having to drag that rugged, wooden device of torture up a hill every day. Imagine having to be nailed to that perverse tool of execution every day! The very thought of dying on a Cross was torturous to anyone living in those times.

No, Jesus never intended for us to take up our own cross and suffer like Him. None of us can. We were sinners! We needed redemption. We needed righteousness. There is no way we could achieve it ourselves.

"For Christ also hath once suffered for sins, the just for the unjust, that he might bring us to God, being put to death in the flesh, but quickened by the Spirit:" (1 Peter 3:18)

Notice that Jesus suffered for sins, all the sins of the world, not just yours and mine, and He suffered once. If we were to suffer for our own sins, we could never "not suffer", so to speak, because our blood, tainted with sin, could never repay the debt we owe to God for our sins.

So, Jesus was never interested, nor did He intend for us to take up a cross and suffer as He did.

Notice what Paul writes to the Colossians:

His Cross, Not yours, not mine, but HIS!

He died on His cross for us!

Indeed, we will suffer for our faith in Christ, but whatever reproach, shame, indignties, or death the world can visit upon us, they are nothing compared to Christ's glory in us! (Colossians 1:27):

"For I reckon that the sufferings of this present time are not worthy to be compared with the glory which shall be revealed in us." (Romans 8:18)

Brothers and sisters in Cross, stop trying to take up "your cross". That was never Jesus' intention. See Jesus as Your Savior, the one who died on His Cross, not only paying for all our sins, but granting us His righteousness, and in fact rendering inoperative the Law of Moses against us by fulfilling all of its requirements against us.