I Want to See More of Jesus (Without the Trials)

"And lead us not into temptation, but deliver us from evil: For thine is the kingdom, and the power, and the glory, for ever. Amen." (Matthew 6:13)

I was thinking about this verse and some of the trials which I have faced in the last few months. "Lord, I want to gain a greater revelation of who you are and everything that you are doing--and have done in my life. I would like to gain this greater revelation without all the hardships."

Sometimes, I wonder if I could "Fast Track" my revelation of Jesus, by which His grace superabounds all the more in our lives:

"Grace and peace be multiplied unto you through the knowledge of God, and of Jesus our Lord," (2 Peter 1:2)

Indeed, we can, apparently, pray that we not enter into trials and testings, and if we find ourselves facing some tough trials, we can still reach out and receive more of God's grace to get through it all.

Another line of revelation comes through as I write this.

God did indeed test Abraham, to show to the world and to him--to Abraham--that he had indeed become the father of faith:

"1And it came to pass after these things, that God did tempt Abraham, and said unto him, Abraham: and he said, Behold, here I am." (Genesis 22:1)

God would test Abraham, which means not "tempt to sin", but rather "prove as genuine".

Abraham demonstrated his faith in God clearly, since he was prepared to sacrifice his son Isaac on the altar, and he also believed firmly that God would bring his son back from the dead:

"Accounting that God was able to raise him up, even from the dead; from whence also he received him in a figure." (Hebrews 11:19)

In a very clear sense, Abraham's son Isaac was as good as dead. Abraham was resigned to losing his son through sacrifice, and yet also knowing that God would resurrect him.

Abraham was spared the actually pain of completing the sacrifice on his son:

"11And the angel of the LORD called unto him out of heaven, and said, Abraham, Abraham: and he said, Here am I. 12And he said, Lay not thine hand upon the lad, neither do thou any thing unto him: for now I know that thou fearest God, seeing thou hast not withheld thy son, thine only son from me. 13And Abraham lifted up his eyes, and looked, and behold behind him a ram caught in a thicket by his horns: and Abraham went and took the ram, and offered him up for a burnt offering in the stead of his son. 14And Abraham called the name of that place Jehovahjireh: as it is said to this day, In the mount of the LORD it shall be seen." (Genesis 22:11-14)

Notice that in Genesis 22:1, "Elohim", God's name as Creator, calls on Abraham to sacrifice his son.

In Genesis 22:11, it's "The Angel of the LORD", i.e. Jesus who calls on Abraham to hold off from sacrificing his son.

Yes, I want to see more of Jesus without the trials, but sometimes it's the trials which allow us to see more of Him. We need to recognize that no matter how bad things may get in our lives, we do not have to wonder if He will take care of us or not.

Then again, there are other instances of trials, where even when Jesus saves people, they still don't understand who He is: 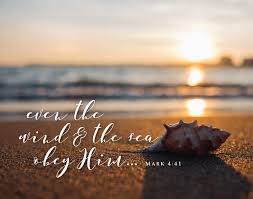 "37And there arose a great storm of wind, and the waves beat into the ship, so that it was now full. 38And he was in the hinder part of the ship, asleep on a pillow: and they awake him, and say unto him, Master, carest thou not that we perish? 39And he arose, and rebuked the wind, and said unto the sea, Peace, be still. And the wind ceased, and there was a great calm. 40And he said unto them, Why are ye so fearful? how is it that ye have no faith? 41And they feared exceedingly, and said one to another, What manner of man is this, that even the wind and the sea obey him?" (Mark 4:37-41)

Jesus allayed the storm with one word.

The disciples among the many ships on the water ended up feeling "exceedingly." One would think that after Jesus' stilling the storm, they would have rejoiced with great peace and thanksgiving. They faced this trial, they cried out to their "Master" (Not Savior) for help, and he overanswered their prayer.

And yet still they were afraid.

Indeed, I want to see more of Jesus, but without the trials. I want to grow in grace and knowledge of the Lord, and I want His Word to serve as the best--and ultimately only--training ground.

"For therein is the righteousness of God revealed from faith to faith: as it is written, The just shall live by faith." (Romans 1:17) 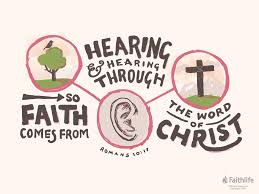 I believe that we can see more of Jesus, that more of His grace can move and thrive within us and throughout our circumstances. And we can enjoy all He has for us without some of the trials that we face.
Posted by Arthur Christopher Schaper at 8:39 AM