Jesus, More Than Beauty, but a Saving Star

Throughout the Old Testatment, we can see pictures of Jesus, of His Finished Work, of the blessed transition from the Old Covenant to the New Covenant.

There is one clear example outstanding in the Book of Esther. This section of the Bible is noteworthy in that the name of God, whether "Elohim" or "Yahweh" is never mentioned.

And yet ... and yet His power, His grace is at work throughout the book.

"10On the seventh day, when the heart of the king was merry with wine, he commanded Mehuman, Biztha, Harbona, Bigtha, and Abagtha, Zethar, and Carcas, the seven chamberlains that served in the presence of Ahasuerus the king, 11To bring Vashti the queen before the king with the crown royal, to shew the people and the princes her beauty: for she was fair to look on. 12But the queen Vashti refused to come at the king's commandment by his chamberlains: therefore was the king very wroth, and his anger burned in him." (Esther 1: 10-12)

Here, we have King Ahasuerus, who summoned his wife Vashti to appear before him and his guests.

The Israelites rejected their king when Jesus came in AD 33. They had cried out "Hosanna! Hosanna!", but then rejected Him when he was condemned before six false courts and ultimately hanged on a Cross.

The Old Covenant is beautiful, the law is good, but it cannot make any of us good. It's beauty does not help us, does not save us:

The king was angry, just as Jesus recounts a ruler who invited guests to his supper, and they all refused (cf Luke 14:15-24):

"21So that servant came, and shewed his lord these things. Then the master of the house being angry said to his servant, Go out quickly into the streets and lanes of the city, and bring in hither the poor, and the maimed, and the halt, and the blind." (Luke 14:21)

Jesus uses the above parable to blast the Israelites during His earthly ministry who rejected Him, so Jesus would reach out to the "undesirable" and other univited guests.

That includes you and me, those who were dead in our trespasses, whom Jesus brought back to life and then seated us in heavenly places! (Ephesians 2:4-6)

So, Vashti was rejected, for her refusal to come before the king harmed not only him:

"And Memucan answered before the king and the princes, Vashti the queen hath not done wrong to the king only, but also to all the princes, and to all the people that are in all the provinces of the king Ahasuerus. 17For this deed of the queen shall come abroad unto all women, so that they shall despise their husbands in their eyes, when it shall be reported, The king Ahasuerus commanded Vashti the queen to be brought in before him, but she came not." (Esther 1: 16-17) 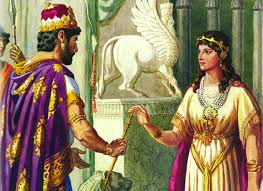 Esther would be chosen to be the next queen, highly favored, placed in the right place at the right time.

The distinction between beauty and starlight cannot be overlooked.

Soren Kierkegaard, a Christian fundamentalist and polemicist, writes in Fear and Trembling:

"[I]t is one thing to be admired and another to become a guiding star that saves the anguished."

The law is beautiful, but it cannot save us, it cannot yield to grace. Jesus our star guides us to safety. The radiance of His beauty blesses us.

Esther, the picture of the New Covenant and of our Lord Jesus Christ, saved her people from ultimate destruction. She received great grace and favor, just as He came to the earth full of grace and truth (Johnn 1:14).

A foreign bride for a king, Esther represents the Gentiles, the nations who would heed Jesus' call for salvation, too.

Today, let us recognize that Jesus is indeed altogether lovely (Songs 5:16), but He does not hide behind his beauty or use it as an excuse to disdain us.

Jesus, our heavenly King, came to serve--and to save!

"For even the Son of man came not to be ministered unto, but to minister, and to give his life a ransom for many." (Mark 10:45)