Christmas: Jesus, The Light for the World Stepping into Our Darkness

Christmas is generally celebrated just after the darkness day of the year, the Winter Solstice.

The celebration coincides with pagan traditions, in which different tribes in pre-Christian Europe and the Roman Empire would rejoince that the sun was starting to come back, to shine for longer periods of the day.

For many, Christmas is a dark time, though not just in terms of the lack of light in the sky. They miss loved ones who have passed away, for example, or they struggle to make sense of the strange loneliness or loss which dogs them during that time of year.

Some psychologists point out that people tend to focus very keenly on their lives at this point, and they see that their lives have not measured up they way they wanted them to. There is a great deal of introspection at the end of the year, and indeed this time of year can be dark not just in the sky, but also in people's hearts and minds.

Yet this season is about Jesus, the Light of the World, and Jesus always appears when it is dark!

Consider His first appearing in God's Word. Not in the Gospels, but In The Beginning!

"And God said, Let there be light: and there was light. 4And God saw the light, that it was good: and God divided the light from the darkness. 5And God called the light Day, and the darkness he called Night. And the evening and the morning were the first day." (Genesis 1:1-3)

God did not make the world broken, failed, and empty:

"He hath made every thing beautiful in his time: also he hath set the world in their heart, so that no man can find out the work that God maketh from the beginning to the end." (Ecclesiastes 3:11)

God makes all things beautiful. It follows, then, that God did not make the world broken.

At any rate, the world was without form and void.

God said "Light Be!" And it was. God did not create the Light. He revealed the Light.

This Light is Jesus, who declared Himself to be "The Light of the World" (John 8:12).

"For by him were all things created, that are in heaven, and that are in earth, visible and invisible, whether they be thrones, or dominions, or principalities, or powers: all things were created by him, and for him:" (Colossians 1:16)

Consider His appearance before Manoah, the father of Samson:

"And the children of Israel did evil again in the sight of the LORD; and the LORD delivered them into the hand of the Philistines forty years.

"And there was a certain man of Zorah, of the family of the Danites, whose name was Manoah; and his wife was barren, and bare not. 3And the angel of the LORD appeared unto the woman, and said unto her, Behold now, thou art barren, and bearest not: but thou shalt conceive, and bear a son." (Judges 13:1-3)

The Philistines were oppressing the Israelites. They were bitter enemies, Satanic giants. It was a dark time for Israel. Then The Angel of the Lord, Jesus, appeared to these two parents to let them know that they would bring a Savior into their lives to stamp out the tyranny of the Philistines.

And of course, Jesus, the Light of the Lord, came into the dark world of the Roman Empire, when God had been silent for 400 years, since He had not spoken through any prophet.

Wise men came seeking Jesus, and the reaction from the rulers and the people of Jerusalem was not what we would expect:

"Saying, Where is he that is born King of the Jews? for we have seen his star in the east, and are come to worship him. 3When Herod the king had heard these things, he was troubled, and all Jerusalem with him." (Matthew 2:2-3)

Everyone was troubled. Herod was a usurper who had no business reigning on any throne in Jerusalem. And the darkness would only grow worse once Jesus was born:

"Then Herod, when he saw that he was mocked of the wise men, was exceeding wroth, and sent forth, and slew all the children that were in Bethlehem, and in all the coasts thereof, from two years old and under, according to the time which he had diligently inquired of the wise men. 17Then was fulfilled that which was spoken by Jeremy the prophet, saying,

"In Rama was there a voice heard, lamentation, and weeping, and great mourning, Rachel weeping for her children, and would not be comforted, because they are not." (Matthew 2:16-18)

Yet Jesus, the Light of the World, came into the darkness every time to bring His Light, to shine and guide those who were in pain, in loss, or lost altogether.

"2The people that walked in darkness have seen a great light: they that dwell in the land of the shadow of death, upon them hath the light shined." (Isaiah 9:2) 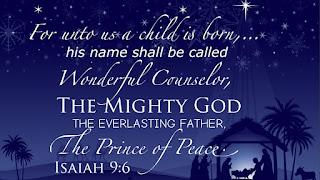 "For unto us a child is born, unto us a son is given: and the government shall be upon his shoulder: and his name shall be called Wonderful, Counseller, The mighty God, The everlasting Father, The Prince of Peace." (Isaiah 9:6)

"And he said, It is a light thing that thou shouldest be my servant to raise up the tribes of Jacob, and to restore the preserved of Israel: I will also give thee for a light to the Gentiles, that thou mayest be my salvation unto the end of the earth." (Isaiah 49:6)
Posted by Arthur Christopher Schaper at 5:27 PM

Email ThisBlogThis!Share to TwitterShare to FacebookShare to Pinterest
Labels: Christmas, Jesus, Light of the World