The Holy Spirit is Guiding Us, Even When It Seems Like a Set-Up

Throughout the Bible, both Old and New Testaments, God's people face unjust trials and convictions many times.

Yet the LORD leads all of them out of those dark times into greater light, glory, freedom, and blessing--not just for themselves, either, but for others, too.

With all of this in mind, I found this passage in Genesis 37:

12And his [Joseph] brethren went to feed their father's flock in Shechem. 13And Israel said unto Joseph, Do not thy brethren feed the flock in Shechem? come, and I will send thee unto them. And he said to him, Here am I. 14And he said to him, Go, I pray thee, see whether it be well with thy brethren, and well with the flocks; and bring me word again. So he sent him out of the vale of Hebron, and he came to Shechem.

Here, we have a perfect picture of the Lord Jesus Christ, sent by his Father to visit His Brethren, the Jewish people.

Now here's the part which stands out about the Holy Spirit:


15And a certain man found him, and, behold, he was wandering in the field: and the man asked him, saying, What seekest thou?

16And he said, I seek my brethren: tell me, I pray thee, where they feed their flocks. 17And the man said, They are departed hence; for I heard them say, Let us go to Dothan. And Joseph went after his brethren, and found them in Dothan.

So, here we have an unnamed person telling Joseph to find his brothers in a clear location.

This man guided Joseph to his bitter, envious brothers, who sold him into slavery, then lied to their father to make him believe that Joseph had been killed by a wild animal.

It would seem that the Holy Spirit, or in the case of the above account the unnamed man, lead Joseph into a trap.

In truth, we all know that this guidance, this direction led to Joseph's massive promotion and glory.

When Joseph later revealed himself to his brothers in Egypt, he comforted them:

"Now therefore be not grieved, nor angry with yourselves, that ye sold me hither: for God did send me before you to preserve life." (Genesis 45:5) 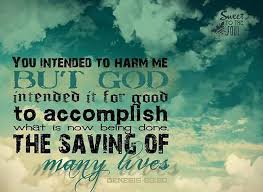 "And God sent me before you to preserve you a posterity in the earth, and to save your lives by a great deliverance." (Genesis 45:7)

Even when the brothers once again attempt to deceive Joseph, fearing that he would turn on them after their father Jacob died, Joseph would say to them:

"19And Joseph said unto them, Fear not: for am I in the place of God? 20But as for you, ye thought evil against me; but God meant it unto good, to bring to pass, as it is this day, to save much people alive. 21Now therefore fear ye not: I will nourish you, and your little ones. And he comforted them, and spake kindly unto them." (Genesis 50:19-21)