In Christ, We are Protected 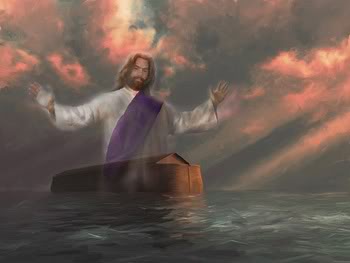 "By faith Noah, being warned of God of things not seen as yet, moved with fear, prepared an ark to the saving of his house; by the which he condemned the world, and became heir of the righteousness which is by faith." (Hebrews 11: 7)

Noah speaks of rest, and when we rest in Christ Jesus and all that He has done for us, we do not have to worry about what may come our way.

God led Noah to build the Ark, yet He closed the door to secure them:

"And they that went in, went in male and female of all flesh, as God had commanded him: and the LORD shut him in." (Genesis 7: 6)

God the Father warns us before bad things may come.

We see many examples of Jesus warning us of many things to come.

He told His disciples to flee to the Mountains when the Temple would be destroyed (Luke 21: 21)

Yet we have the greatest promise recorded for us in the Psalms:

"1He that dwelleth in the secret place of the most High shall abide under the shadow of the Almighty.

2I will say of the LORD, He is my refuge and my fortress: my God; in him will I trust." (Psalm 91: 1-2)
Now, when Noah stepped into the Ark, a picture of Jesus Christ, he broke away from the world condemned in sin.
Jesus spoke about this mission, to save us from death and give us life, when Nicodemus came to Him:
"For God so loved the world, that he gave his only begotten Son, that whosoever believeth in him should not perish, but have everlasting life." (John 3: 16)
Without Jesus, we remain condemned:
"For God sent not his Son into the world to condemn the world; but that the world through him might be saved. 18He that believeth on him is not condemned: but he that believeth not is condemned already, because he hath not believed in the name of the only begotten Son of God. " (John 3: 17-18)
For those of us who have done the one work of believing on Him (John 6: 29), then we are no longer condemned with the world, and now we are heirs of righteousness:
"For the promise, that he should be the heir of the world, was not to Abraham, or to his seed, through the law, but through the righteousness of faith." (Romans 4: 13)
and also
"For he hath made him to be sin for us, who knew no sin; that we might be made the righteousness of God in him." (2 Corinthians 5: 21)
When we rest in Christ's Finished Work, and we receive His righteousness, we are protected from the condemnation of the world, and even of our sin:
"1There is therefore now no condemnation to them which are in Christ Jesus, who walk not after the flesh, but after the Spirit. 2For the law of the Spirit of life in Christ Jesus hath made me free from the law of sin and death. 3For what the law could not do, in that it was weak through the flesh, God sending his own Son in the likeness of sinful flesh, and for sin, condemned sin in the flesh." (Romans 8: 1-3)
Because of Jesus, because you believe in Him, know that you are protected!
Posted by Arthur Christopher Schaper at 1:00 AM