Why Christ Jesus Told Mary "Don't Touch Me" at The Tomb

"Jesus saith unto her, Touch me not; for I am not yet ascended to my Father: but go to my brethren, and say unto them, I ascend unto my Father, and your Father; and to my God, and your God." (John 20:17)

When I was in high school, I approached one of the elders in my local church about this passage. Mary recognized Jesus as soon as He said her name.

She called Him "Rabboni", which means "my teacher". It was personal!

The elder shared with me that Jesus did not want to interrupt her lack of faith.

Later on, Jesus would reveal Himself to the eleven remaining disciples, and even invited Thomas to touch His wounds so that He would believe on Him.

But really, though, why did Jesus tell Mary not to touch Him?

It has to do with His next work to fulfill in His death on the Cross. Note that Jesus told Mary "I have not yet ascended to my Father."

Jesus was not talking about His first Ascension are recorded in the Book of Acts.

This ascension had to do with His new role as our High Priest Forever!

"11But Christ being come an high priest of good things to come, by a greater and more perfect tabernacle, not made with hands, that is to say, not of this building; 12Neither by the blood of goats and calves, but by his own blood he entered in once into the holy place, having obtained eternal redemption for us. 13For if the blood of bulls and of goats, and the ashes of an heifer sprinkling the unclean, sanctifieth to the purifying of the flesh: 14How much more shall the blood of Christ, who through the eternal Spirit offered himself without spot to God, purge your conscience from dead works to serve the living God?" (Hebrews 9:11-14)

"23It was therefore necessary that the patterns of things in the heavens should be purified with these; but the heavenly things themselves with better sacrifices than these. 24For Christ is not entered into the holy places made with hands, which are the figures of the true; but into heaven itself, now to appear in the presence of God for us:" (Hebrews 9:23-24)

Jesus completed the full minister as our Great High Priest.

When Mary had arrived at the tomb, Jesus had not yet ascended to complete the work!

And a High Priest must remain undefiled!

Jesus ascended into heaven, before the Heavenly Father. His blood cleansed the place where Satan had stood, where Adam at once time was graced to stand but rejected because He had submitted to an outlaw Spirit.

After Jesus ascended to cleanse the Holy of Holies, He returned to His disciples:

"19Then the same day at evening, being the first day of the week, when the doors were shut where the disciples were assembled for fear of the Jews, came Jesus and stood in the midst, and saith unto them, Peace be unto you. 20And when he had so said, he shewed unto them his hands and his side. Then were the disciples glad, when they saw the Lord. 21Then said Jesus to them again, Peace be unto you: as my Father hath sent me, even so send I you. 22And when he had said this, he breathed on them, and saith unto them, Receive ye the Holy Ghost: 23Whose soever sins ye remit, they are remitted unto them; and whose soever sins ye retain, they are retained." (John 20:19-23)

Jesus told Mary "Don't Touch Me", because He had not yet cleansed the Holy of Holies in the Heavenlies, the last part of His Finished Work as our High Priest Forever! 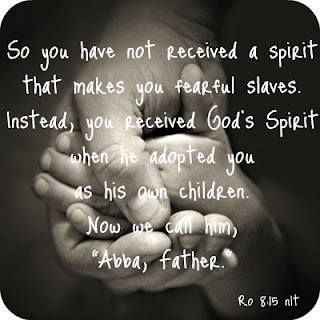 With that final cleansing, He came down to His disciples, breathed on them to receive His Holy Spirit, the Spirit of Adoption (Romans 8:15), so that we could call God "Daddy!"