Does God Ignore Our Prayer? No, He Answers Beyond What We Asked!

The last two weeks presented some incredible trials to me.

I had no idea what to think, how to respond.

I had prayed so diligently for a certain outcome in one very dire situation, and it never came to pas. The exact opposite occured, which had really unsettled me. I didn't know what to think!

God, why didn't you answer my prayer? Those were the thoughts circling through my mind, but I didn't cave to unbelief.

I sure didn't understand what was going on, though.

Then I realized ... God's delays are part of God not just answering our prayers, but going above and beyond what we have asked! 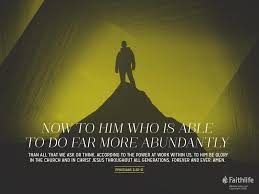 "Now unto him that is able to do exceeding abundantly above all that we ask or think, according to the power that worketh in us," (Ephesians 3:20)

I am sure that Abraham and Sarah prayed, struggled, and wondered if God cared for them.

Their son was not only a champion, but was blessed wherever he went.

"The man began to prosper, and continued prospering until he became very prosperous" (Genesis 26:13)

Jacob wanted his son back. Jacob discovered that not only was his son Joseph alive, but he was the ruler over all Egypt, and through his new position, maneuvered into place by Almight God, Joseph saved many lives!

"Now therefore be not grieved, nor angry with yourselves, that ye sold me hither: for God did send me before you to preserve life." (Genesis 45:5)

"But as for you, ye thought evil against me; but God meant it unto good, to bring to pass, as it is this day, to save much people alive." (Genesis 50:20)

Then let's consider Mary and Martha, and their cry for Jesus to heal their brother Lazarus.

He delayed coming to them, and Jesus did so because He loved them:

"5Now Jesus loved Martha, and her sister, and Lazarus. 6When he had heard therefore that he was sick, he abode two days still in the same place where he was." (John 11:5-6)

The two sisters, sisters whom Jesus loved, got "the hand"?

Martha and then Mary saw Jesus as "The Resurrection and the Life" (John 11:25)

Mary and Martha witnessed Jesus bring their brother back from the dead!

"43And when he thus had spoken, he cried with a loud voice, Lazarus, come forth. 44And he that was dead came forth, bound hand and foot with graveclothes: and his face was bound about with a napkin. Jesus saith unto them, Loose him, and let him go." (John 11:43-44)

I would not be one bit surprised that Mary and Martha was glad that Jesus did not answer their prayer, which was:

In the next chapter, we see Martha serving without grumbling, for the Resurrection and the Life, with his brother resurrected back to life sitting at the same table!

"1Then Jesus six days before the passover came to Bethany, where Lazarus was which had been dead, whom he raised from the dead. 2There they made him a supper; and Martha served: but Lazarus was one of them that sat at the table with him." (John 12:1-2)

Jesus more than answered their prayer, didn't He?

Don't doubt when God delays, or when God doesn't seem to answer your prayers.

Point of fact, He is preparing to "over-answer" them, beyond what you asked!