Jesus Sacrificed for Us -- Our Only "Sacrifice" is Praise, and To Keep Receiving From Him

This statement from Bishop Macedo is making the rounds on social media.

I have printed the first part of his statement below:


Those who believe that it is possible to be a Christian and not sacrifice are highly mistaken. From Genesis to Revelation, sacrifice is the foundation of Christian life as well as the foundation of walking with God. However, many religious people who have their hearts set on the gold and not the Altar use biblical passages out of context to affirm that we should not sacrifice. But each of these passages, in their proper context, reinforce the need for sacrifice. For example:

I am going to comment on the surface about this statement: "Christians need to sacrifice, give their lives to God."

First of all, we do not really have lives to give God.

We are the ones who need life.

Jesus did not mince words on our need for life:

Jesus came that we might have life. That means we have to accept the corrolary behind it: we don't have life.

John was crystal clear on this in his First Epistle, too:

When we came to Jesus, when we receive His Sonship before God as Father, we had nothing.

Consider the prodigal son when he returned to his loving Father.

He was destitute. He was reeking of pigs. He was emaciated. He had nothing. He had been reduced to nothing.

And how did the Father respond to Him?

Is there ultimate a sacrifice that we make to God, our Loving Father?

"By him therefore let us offer the sacrifice of praise to God continually, that is, the fruit of our lips giving thanks to his name." (Hebrews 13:15) 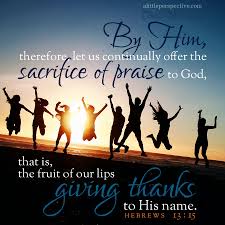 Notice that even when we offer the sacrifice of praise to God, we are doing so through Jesus!

There is nothing that we do, that we have, that we give, that we are apart of Christ Jesus.

It's time for us to give up this idea that we have the opportunity, the resources to give something to God.

He gives us everything, and in return we can only release what He has already given us.

"But who am I, and what is my people, that we should be able to offer so willingly after this sort? for all things come of thee, and of thine own have we given thee." (1 Chronicles 29:14)

David asked this question, too:

The answer to God's Goodness?

Say "Thank You!" and take more!

That's what pleases God, and it's hard for our human pride, our flesh. We want to "pay back", we want to have some part in giving back.

Yet the truth is that there is no other sacrifice we can offer. Let's give up this idea that we need to "sacrifice for God."

He had to offer the sacrifice for us in the first place: His Own Son!

"11And every priest standeth daily ministering and offering oftentimes the same sacrifices, which can never take away sins: 12But this man, after he had offered one sacrifice for sins for ever, sat down on the right hand of God; 13From henceforth expecting till his enemies be made his footstool." (Hebrews 10:11-13)

Let's stop trying to "sacrifice everything for God." In and of ourselves, we have nothing to give. Whatever we have, He gave to us first. Let us receive from Him all the more, and offer our praise for how good God our Father is!