God Mourns Even More When the Evil Perish

"Say unto them, As I live, saith the Lord GOD, I have no pleasure in the death of the wicked; but that the wicked turn from his way and live: turn ye, turn ye from your evil ways; for why will ye die, O house of Israel?" (Ezekiel 33:11) 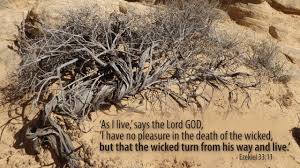 Throughout the Bible, in the Old Testament and certainly in the New, God is presented as one who is slow to anger:

God does not rejoice in the destruction of the wicked, of the evil people in the world who defy His love and reject His grace. 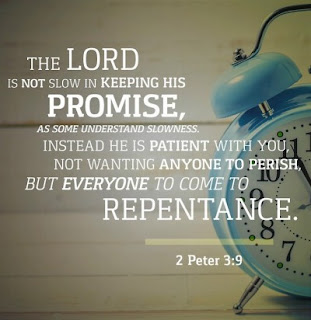 "The Lord is not slack concerning his promise, as some men count slackness; but is longsuffering to us-ward, not willing that any should perish, but that all should come to repentance." (2 Peter 3:9)

There is great sorrow in the destruction of His creation, who reject His will, who spurn his love.

The contrast cannot be better seen than in David's response to the death of two sons.

The first, born out of wedlock to Bathsheba, begins with David's determined prayers to for his young life:

"And the LORD struck the child that Uriah's wife bare unto David, and it was very sick. 16David therefore besought God for the child; and David fasted, and went in, and lay all night upon the earth.  ...  (2 Samuel 12: 15-16

Despite his most fervent prayers, the baby died. David learned that his child had died, and this is how he responded:

"20Then David arose from the earth, and washed, and anointed himself, and changed his apparel, and came into the house of the LORD, and worshipped: then he came to his own house; and when he required, they set bread before him, and he did eat." (2 Samuel 12:20)

Unsurprisingly, his servants were surprised at his calm, restored demeanor.

"22And he said, While the child was yet alive, I fasted and wept: for I said, Who can tell whether GOD will be gracious to me, that the child may live? 23But now he is dead, wherefore should I fast? can I bring him back again? I shall go to him, but he shall not return to me." (2 Samuel 12:22-23)

Even though David had fasted, prayed, begged for God to deliver his child, and even though God ultimately did not restore the child but allowed the child to die, David could be restored to a sense of peace. Why? "I shall go to him."

David knew that he would see his son again.

But what about with the death of Absalom?

This son, who had betrayed, slandered, and rebelled against his own father, enough that he would have happily slayed him in the fields of battle, the same son who would rape David's concubines before all the nation of Israel; iof this same son David would say:

Such grace David had accorded to his son, who did not deserve it in the least.

When he learned of his death, at the hands of the very mighty men to whom he had order not to kill his son, David mourned with great outcry:

The mourning was loud, unrelenting for David. Why? Because his son was not only dead, but lost forever, damned. Such a loss could never be recovered.

He died for us while we were still sinners, lost creatures who did not know where we had come from, nor who realized how much God so loved us (Romans 5:8; 1 John 4:11).

God mourns when the evil perish, for they, part of His glorious creation, will never be able to repent.