There Will Be Hard Times, But Rejoice - Here's Why

"These things I have spoken unto you, that in me ye might have peace. In the world ye shall have tribulation: but be of good cheer; I have overcome the world." (John 16:33) 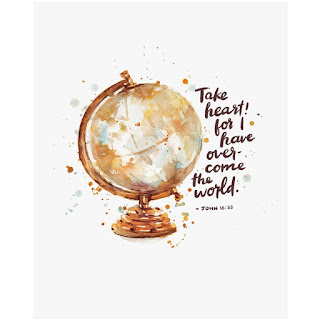 That is simply not true.

Jesus, before He delivered High high priestly prayer, before He was dragged before six false courts to be judged guilty for nothing, then crucified, told His disciples: "You will have tribulation in the world."

But there's no reason for us to panic, fear, or be discouraged.

Jesus overcame the world when He died on the Cross.

Jesus announced to His disciples what His work on the Cross would accomplish, with the Holy Spirit coming into the world:

"8And when he is come, he will reprove the world of sin, and of righteousness, and of judgment: 9Of sin, because they believe not on me; 10Of righteousness, because I go to my Father, and ye see me no more; 11Of judgment, because the prince of this world is judged." (John 16:8-11)

The world will be reproved for its sin.

Yes. They will not get away with it. The conviction that comes upon the world comes from the fact that they do not believe on Christ Jesus.

John expounds on this further in his First Epistle:

"Ye are of God, little children, and have overcome them: because greater is he that is in you, than he that is in the world." (1 John 4:4)

He has overcome the world.

We believe on Jesus.

Through Jesus, we overcome, too.

In fact, Paul put it so simply:

"Nay, in all these things we are more than conquerors through him that loved us." (Romans 8:37)

In all things, not some things, we are more than conquerors. Yes, there will be hard times, but so what? He has overcome them, and we are more than overcomes in Him!
Posted by Arthur Christopher Schaper at 8:23 AM