God's Heavenly Hosts Are On Your Side

"And Jacob went on his way, and the angels of God met him. 2And when Jacob saw them, he said, This is God's host: and he called the name of that place Mahanaim." (Genesis 32:1-2)

Jacob came across God's Heavenly Hosts early on, as he was fleeing from his corrupt uncle Laban, as he worried about what would happen to him when his brother Esau found him.

For a long time, I had often wondered what had caused Esau to receive Jacob in such a favored and favorable fashion.

First of all, Jacob was terrified beyond belief, and he was desperately trying to buy his brother's favor:

"3And Jacob sent messengers before him to Esau his brother unto the land of Seir, the country of Edom. 4And he commanded them, saying, Thus shall ye speak unto my lord Esau; Thy servant Jacob saith thus, I have sojourned with Laban, and stayed there until now: 5And I have oxen, and asses, flocks, and menservants, and womenservants: and I have sent to tell my lord, that I may find grace in thy sight." (Genesis 32: 3-5)

Yet consider once again that the angels of God met Jacob, and he recognized them as "God's host".

They were God's army!

So, what was it that turned Esau's heart?

I believe indeed it was God's favor on Jacob, and Jacob acknowledged as much:

"11Take, I pray thee, my blessing that is brought to thee; because God hath dealt graciously with me, and because I have enough. And he urged him, and he took it." (Genesis 33:11)

I also submit that because Jacob was defended by God's host of angels, Esau recognized it was not a wise idea to confront and destroy his brother, his family, and his possessions.

Every day that we head out into the world, we need to recognize that God's heavenly hosts is on our side!

His host is greater than any host that the world can bring against us: 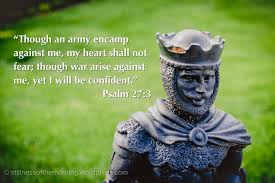 "Though an host should encamp against me, my heart shall not fear: though war should rise against me, in this will I be confident." (Psalm 27:3)

"A thousand shall fall at thy side, and ten thousand at thy right hand; but it shall not come nigh thee." (Psalm 91:7)

If anyone has wronged us, God not only hears us, but James recognizes that God - the Lord of Hosts! - has heard us and will avenge us!

"Behold, the hire of the labourers who have reaped down your fields, which is of you kept back by fraud, crieth: and the cries of them which have reaped are entered into the ears of the Lord of sabaoth." (James 5:4)

God is on your side, and He has His heavenly hosts with you!

Posted by Arthur Christopher Schaper at 9:39 AM