Rest In Jesus' Righteousness, In the Midst of Every Storm 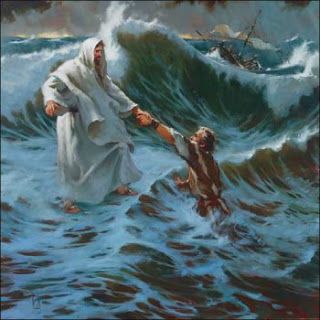 In the United States, lawlessness is become the law. Courts, executives, legislators are ignoring the spirit of the law, and they are dispensing with the Laws of Nature and Nature's God.

When the United States Supreme Court ruled that words in a statute could be reinterpreted to mean something entirely different, I was crushed, devastated. I had so hoped that the current court appointed by the current President would rule in a righteous, judicious manner.

But they did not.

This prophecy is coming to pass in our midst, in our times, in our generation:

"For the mystery of lawlessness is already at work; only He who now restrains will do so until He is taken out of the way." (2 Thessalonians 2:7)

I was so dejected, so unhappy. I just felt like giving up the calling that God my loving Father had given me.

Of course, in times of great hurt, trial, pain, we don't have to run and hide, and we do not have to hide our pain.

Let us call out to Him when we are in trouble:

I had faced similar privations before, a sense that all was lost. I still remember years prior when I had no money, no vehicle, and a number of other pressing engagements against me. I cried out, and then I recalled those days when even though I had every material need taken care of, a sense of deep shame had cast a terrible pall over me. What good are the goods of the world if you feel condemned in your Spirit?

And then I remembered: God's gift of righteousness overcomes all hurts and pains! No matter what may happen in this world, I know that I have been made the righteousness of God in Christ Jesus (2 Corinthians 5:21)

That has to be the most important prize to us. Christ is our Wisdom, and our Righteousness. In Him, we are justified from all things, from which we could not be justified through the Law of Moses (Acts 13:  38-39)

Righteousness produces the very peace that all of us crave:

"Now no chastening for the present seemeth to be joyous, but grievous: nevertheless afterward it yieldeth the peaceable fruit of righteousness unto them which are exercised thereby." (Hebrews 12:11)

So, what is the discipline, the child-training that is happening for me?

I must admit that I was basing my peace on political and judicial outcomes. "When the courts rule this way ... " and "When the President accomplishes this action ..." and "When this legal outcome occurs ...", those were the thoughts that I was still entertaining without realizing it.

The most important thing that we are to rest in, to rejoice about? That we have been made the rightoeusness of God in Christ! That we will never be condemned, shunned, or damned for our sins!

"Notwithstanding in this rejoice not, that the spirits are subject unto you; but rather rejoice, because your names are written in heaven." (Luke 10:20)

God does not want us to rejoice because we are saved, that we have all things in Him ... AND something else, too.

If we are trusting or taking comfort in other things, God is going to shake those complacencies away from us:

When I rested back in that Gift of Righteousness, and keep receiving the gift of righteousness (Romans 5:17), an immediate and lasting peace overwhelmed me! I was not worried about the bad courts, the lawlessness in the streets, the upsetting tumults of leaders who refuse to lead.

I may have felt like Habakkuk, when he cried out to God that so much evil was happening in his generation, and yet God seemed absent (Habakkuk 1:1-4), but I realized that the tumults, my upsets would not dissuade Him from taking care of everything.

That revelation brought me to Jesus walking on the water in Matthew's Gospel (Matthew 14: 22-33).

Peter asked Jesus to invite him to walk on the water, and Jesus did so. Peter began walking on the water toward Jesus, but when he was distracted by the wind, he began to sink. Peter called out to the Lord to save Him, and Jesus "immediately" reached out to him to rescue him (Matthew 14:31).

What was the doubt? Peter thought that the waves, the winds, the whirling around him would be greater than Jesus and His power to keep Peter from drowning. Obviously, that was not the case. Yet also notice that Jesus saved Peter from drowning, and also bear in mind that Peter walked on water to get back to the boat, too!

Now, here's the deeper revelation which came to me, in the midst of these stormy trials battering the nation that I live in, and which may batter against the times and spaces where you find yourself:

For years, I had spent so much of my time mentally, spiritually trying to quite the winds of doubt, hurt, shame, fear, etc. in my mind. I actually believed that I could not "see" Jesus in my life, walk by faith if these tumults of pain, fear, bitterness, anger. etc. welled up suddenly in my mind and emotions.

What I realized earlier this week, and what I receive and share today, is that Jesus simply asks us to rest in His righteousness, to see Him, even if there are storms, winds, and tumults about us. We do not have to eliminate the storms in our lives. He is above the storms, and when we recognize that we are in Him, then we see ourselves overcoming the storms, for "As He is so are we in this world." (1 John 4;17)

There is such a rest in this revelation for me, and I hope that you receive it, as well.

"Many are the afflictions of the righteous: but the LORD delivereth him out of them all." (Psalm 34:19)

Let us make His righteousness our most important priority, for after all, Jesus declared in His Sermon on the Mount:

"But seek ye first the kingdom of God, and his righteousness; and all these things shall be added unto you." (Matthew 6:33)

Jesus fulfilled this promise for us when He died on the Cross, and then sent to His Spirit.

His Holy Spirit today convicts us of righteousness! (John 16:8-10)

And when we are established in His righteousness, we can know and believe that no weapon formed against us will prosper (Isaiah 54:14,17)

Let us rest in His righteousness, in the midst of every storm. He is not going away, and He has already overcome the world and every terror and tremor that it may contain to harm us (John 16:33).

Posted by Arthur Christopher Schaper at 8:59 AM