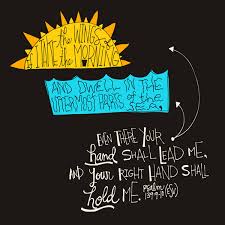 "If I take the wings of the morning, and dwell in the uttermost parts of the sea;

This verse comes from one of the most beloved and well-known Psalms, and yet it's a perfect segue to another powerful example of God's grace in action: Jonah.

Like Abraham, Jonah was a prophet, and he was called to preach to Nineveh, a great, evil nation that had plagued the nation of Israel.

Jonah didn't want to do it!

Now, how effective is it to flee from God?

Really? But that's precisely what Jonah tried to do. God then caused a great wind to come over the sea and strike the boat that Jonah was fleeing on. All the sailors prayed to their gods. They even had to rouse Jonah out of his sleep--can you imagine this self-righteous prophet, sleeping soundly in the bottom of a tempest-tossed ship?--so that he would pray to his God.

Then they all drew lots to see what was causing this terrible storm.

And the lot fell to Jonah, who declared:

This is hilarious. Jonah prides himself as the prophet of the One and Only Living God, and yet this prophet is defying God brazenly, refusing to prophesy to Nineveh!

What kind of rash arrogance is this?! 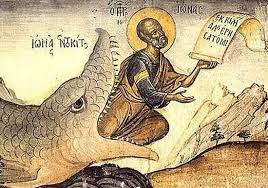 Jonah then told the sailors what to do so that the storm would be calmed:

"Take me up, and cast me forth into the sea; so shall the sea be calm unto you: for I know that for my sake this great tempest is upon you." (Jonah 1:12)

Jonah was so determined to disobey God's command, that he preferred to be tossed into the sea, to be killed in the flailing storms of the rough waters!

The sailors did what Jonah requested, but God was not finished with Jonah:

"17Now the LORD had prepared a great fish to swallow up Jonah. And Jonah was in the belly of the fish three days and three nights." (Jonah 1:17)

Let's assess what we have learned about Jonah:

1. He's a prophet
2. God entrusted him with a great calling, to preach judgment to Nineveh
3. He deliberately refused to do so.
4. He was arrogant enough to think that he could outrun God's call on his life.
5. God sent a storm that troubled the sailors' lives on the ship that he was riding in.
6. He didn't care even about what they were going through, he was sound asleep in the boat!

Yet for all this brazen, arrogant, selfish behavior, God prepared for Jonah to survive, even providing a huge fish to swallow him so that he would survive in the depths of the sea.

And then Jonah called out to God for help:

"Then Jonah prayed unto the LORD his God out of the fish's belly,

"And said, I cried by reason of mine affliction unto the LORD, and he heard me; out of the belly of hell cried I, and thou heardest my voice." (Jonah 2:1-2)

Can you imagine the brazeness of this?! He is praying to the very God whom he had blown off, deliberately disobeyed.

But God hears Jonah, and He delivers his wayward prophet from the mouth of the big fish:

"And the LORD spake unto the fish, and it vomited out Jonah upon the dry land." (John 2:10) 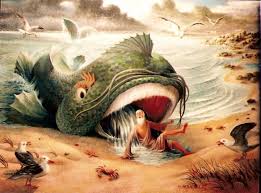 This is an interesting verse because of the word "vomit", which first appears in Leviticus:

"And the land is defiled: therefore I do visit the iniquity thereof upon it, and the land itself vomiteth out her inhabitants" (Leviticus 18:25)

Every other context mentions "Vomit" to mean the abject rejection of a people from God's inheritance.

Its final mention appers here in Jonah, and here we have a disobedient prophet being vomited onto dry land as opposed to being vomited out of the land. What amazing grace.

God has not rejected Jonah, and He will not give up on giving this prophet the mission:

"1And the word of the LORD came unto Jonah the second time, saying, 2Arise, go unto Nineveh, that great city, and preach unto it the preaching that I bid thee. 3So Jonah arose, and went unto Nineveh, according to the word of the LORD. Now Nineveh was an exceeding great city of three days' journey. 4And Jonah began to enter into the city a day's journey, and he cried, and said, Yet forty days, and Nineveh shall be overthrown." (Jonah 3:1-4)

This was all it took for Nineveh to repent. Everyone, from the King right down the commoner repented, put on sackloth, abstained from food, and prayer for God to be merciful to them.

That's all it took!

And God was pleased and relented from His punishment upon them (Jonah 3: 10-11)

Even though Jonah still had a negative spirit about him, even when he still refused to be gracious, hoping that God would change His mind yet again and destroy the entire city, God was still gracious with Jonah, God still ministered to him, and reminded him what grace is all about:

"And God said to Jonah, Doest thou well to be angry for the gourd? And he said, I do well to be angry, even unto death. Then said the LORD, Thou hast had pity on the gourd, for the which thou hast not laboured, neither madest it grow; which came up in a night, and perished in a night: And should not I spare Nineveh, that great city, wherein are more than sixscore thousand persons that cannot discern between their right hand and their left hand; and also much cattle?" (Jonah 4:9-11)

I submit to you that Jonah wrote this entire account, from beginning to end, and he did not hesitate to "Tell on himself." I imagine that Jonah even laughed at his insistence obstinance, but through it all God was good to him.

This account demonstrates how great God's grace really is!

He is there for us even when we want to get away from Him. The most we try to run away from, taking the wings of the morning and to dwell in the deepest parts of the sea, God is not only there for us, but He is guiding us! He is taking us right where He wants us to go.

In fact, God would use Jonah's ministry, his struggles to foretell the coming of Christ Jesus, God's own Son! 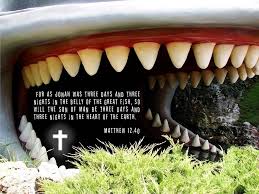 God doesn't just use are failings, He even uses are deliberate disobedience to further His plans, and we in turn are blessed, too! He doesn't give up on us. He simply wants us to reach out to Him every time we face trials and tribulations--even when they are our own fault!
Posted by Arthur Christopher Schaper at 2:44 PM